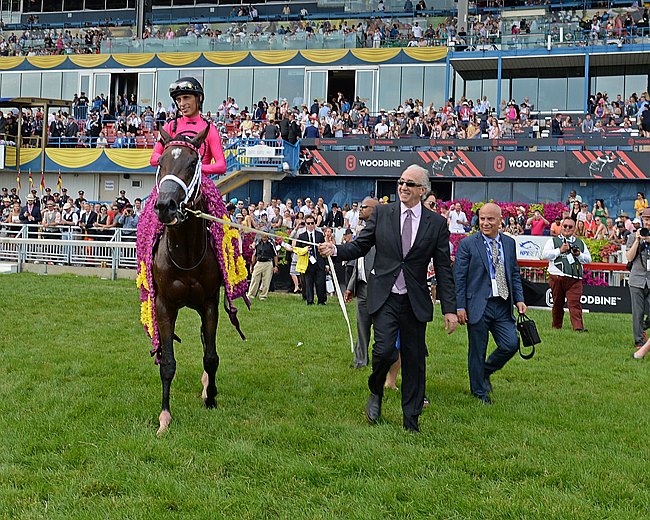 Bred in Ontario by Anderson Farms out of the Vindication mare Loving Vindication, the daughter of Medaglia d’Oro  won the first two jewels in the Canadian Triple Crown in 2018. She took the Queen’s Plate Stakes at Woodbine, becoming just the ninth filly to win that race since its first running at Woodbine in 1956, then won the Prince of Wales Stakes at Fort Erie, the sixth female to achieve that accomplishment.

Casse, a 10-time Sovereign Award winner, was named outstanding trainer of 2018. With 517 starts in Canada alone, his starters won 106 races, 22 of them in stakes events, for earnings of $5,812,969. Casse had another blockbuster season and completed his sweep of the Canadian Triple Crown when Neepawa won the final leg, the Breeders’ Stakes. Also among Casse’s stakes winners in 2018 was Shamrock Rose, the winner of the La Lorgnette Stakes who went on to win the Breeders’ Cup Filly and Mare Sprint (G1).

Robert and Mark Krembil’s Chiefswood Stables, which campaigned Neepawa, was named outstanding owner. Winner of this award in 2017, Chiefswood enjoyed its most successful season. Surpassing its 2017 purse earnings by over $300,000, with six stakes wins, it finished on top of the owner’s standings at Woodbine by earnings. Chiefswood’s five stakes winners—Bold Script, Neepawa, Niigon’s Eclipse, Yorkton, and Tiz a Slam—were among the nominees for Sovereign Awards.

The award for outstanding broodmare went to the Horse Chestnut daughter In Return, the dam of Channel Maker and Johnny Bear.

Escape Clause was named champion older female on the merits of her 9-1-2 record in 13 starts. Trained by Don Schnell and owned by Schnell in partnership with Barry Arnason and True North, the daughter of Going Commando won the Kathryn Crosby Stakes and City of Edmonton Distaff Handicap.

The E. P. Taylor Award of Merit was presented to Canadian Hall of Famers Gustav Schickedanz and the late William D. Graham.

The inaugural Jockey Club of Canada Scholarship Award at the School of Media Studies and Information Technology, Humber Institute of Advanced Technology and Advanced Learning was presented to Bobby Mihalik.