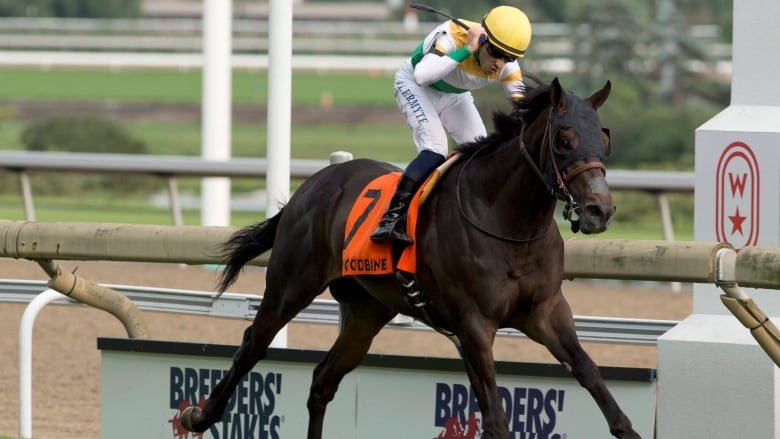 ETOBICOKE, Ontario – Trainer Mark Casse added another accomplishment to his Canadian racing résumé Saturday when Neepawa won the $400,000 Breeders’ Stakes, the third and final jewel of the Canadian Triple Crown, over 1 1/2 miles on the Woodbine turf.

Casse swept all three legs of the Canadian Triple Crown this year – winning the Queen’s Plate and Prince of Wales Stakes with Wonder Gadot, and the Breeders’ Stakes with Neepawa.

“I was touting him pretty good going into the Queen’s Plate,” he said. “We think that he’s a really talented horse, he just hasn’t been able to get it together. He got it together.”

“I’m not a big believer in running 3-year-olds against older horses,” he said. “I just don’t like doing it. I would think we’ll probably stick to straight 3-year-olds. I don’t know where that will lead us, but we’ll figure that out soon.”

Casse began training for Chiefswood Stable in 2017, with Neepawa marking the first stakes winner for the owner-trainer combination. Casse has started four Chiefswood runners in total, including the stakes-placed 3-year-old filly Rosemere, and maidens Edge of the Nile and Think Magic.

“It’s special because of the relationship we have now with Chiefswood,” Casse said about the Breeders’ Stakes win.

Casse said he was also pleased for Lermyte, who began galloping horses for Casse’s assistant trainer David Carroll at Fair Grounds two winters ago. Lermyte became a full-time member of the Woodbine jockey colony last summer, and picked up his second Woodbine stakes win of the season in the Breeders’ Stakes after previously winning the Bison City Stakes for Casse with Safe to Say.

“He came up last year and he did well, but I think that he’s a much better rider this year,” Casse said. “He went back and galloped horses again for us in New Orleans [last winter]. It’s worked out really well and I think he’s riding great. Hopefully, that will help him. You like rewarding hard work and giving the underdog a shot.”

‘Obvious Choice’: Irad Ortiz To Be Named On Wonder Gadot In Travers